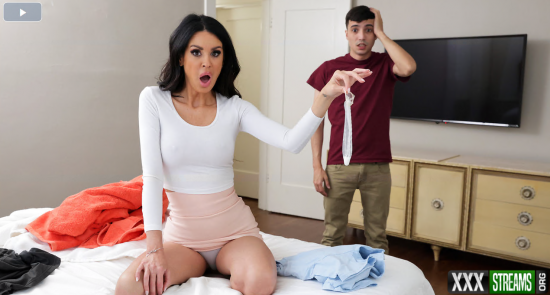 Later that day, Ricky walks in on Jamie daydreaming as she wipes the living room table. She asks Ricky to give her a massage since her shoulders are killing her. Ricky is happy enough to do as he’s asked. While he rubs Jamie’s shoulders, he begins to daydream about their talk earlier. Just as his hands drift to Jamie’s boobs, Ricky murmurs that he wants to cum in her so bad. He snaps back to reality in that moment, but before he can get too embarrassed Jamie admits that she wants it too. With full permission to do whatever he wants to his hot stepmom, Ricky can barely believe it his luck. Jamie makes it all too real when she pops Ricky’s stiffie out of his jeans to start licking and sucking him off.

Practically before Ricky knows what’s what, Jamie has hiked her miniskirt up and sunk down on his hardon to ride him in reverse cowgirl. That position lets her reach down and diddle herself as she bounces away, while also giving Ricky full access to reach up and rub her titties. Getting on her hands and knees, Jamie shows Ricky what it’s like to do his bigtit stepmommy in doggy. She gets on her back next, opening her thighs so Ricky can kneel in front of her and go to work one last time fucking that bald twat. He eventually gives Jamie the creampie she requested, leaving her nice and satisfied.